managing the risk to dramatically improve

by secretariaat on 05 Jul, 2013 - Comments Off on What’s happening in Moldova?

June 21, 2013 – I’m arriving in Chisinau airport, the capitals international hub connecting it to the European Union, Russia and Turkey. It’s a small and efficient airfield and I’m welcomed by a kind young man, Vadim Latchechevici, that will bring me to the first meeting. We’re going to visit ‘Inovatorul’ the incubator at the Technopark of Chisinau. What to expect from this small brave country in the field of incubation?

At the airport we’re joined by Dimitri from Enterprise Estonia, both of us are asked by the technical assistance bureau of the European Commission (TAIEX) to come to Chisinau to our knowledge and experience on Innovation and Business Incubation policies and practices. Dimitri is big open-minded guy which makes it easy to relate to. We’re taken to the car and as soon as we’re in the Dacia, we get into an animated talk, exchanging our experience and missions. The Dacia stops right in front of a typical eastern European building, signposted as the ‘Park for Science and Technology’ and its incubator ‘Inovatorul’. The building is a bit rugged and the inside has similar need for maintenance and care. Vadim takes us to the second floor, where we’re met by the incubator manager Alexander, a bright young manager with a casual Friday look. He takes us into a long dark hall way with many doors to an empty start-up office. There we talk. 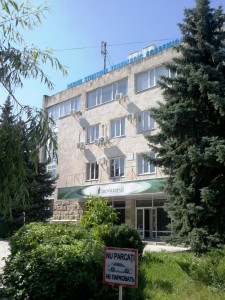 Always trying to visit a local incubator when I’m somewhere new. This time in Chisinau-Moldova

‘Sorry to welcome you like this’, Alexander said, ‘I only learned from your visit this morning, so there was not much time for me to prepare’. ‘I ‘m only Incubator Manager for 1,5 month now, but I know it for many years since I first worked for the Agency for Technology Transfer and Innovation just like Vadim.  Since the agency has offices in this building I know the incubator and a large number of the companies well. For the past year I worked for a commercial firm, and when I heard this function became vacant, I solicited for it.’ ‘The incubator has been established in 2008 and were able to help many companies to establish and grow. The incubator is owned and operated by the Technopark, which through this, hopes to attract technical companies that will need manufacturing and grow-on space after incubation. The program is quite successful, but as you can see we’re in dare need of some renovations.’

We ask Alexander why we see so little common space, like coffee corners or a canteen, for us signals that the incubators facilitates synergies through informal networking. He laughs, recognising what we mean; ‘We’ve one coffee machine downstairs in the hallway, but yêh we have to deal with the situation as we have it. We foster links between the companies by organising network events and trainings, so it’s not too bad. Also the management is focussed at renting out as much square meters as possible.’

We’re curious what kind of start-ups are supported and in what way. ‘We’re mainly looking for engineering and technical businesses. For instance we’re helping a company to setup algea production to produce animal medicine. Another example is a company which produces machine parts for agriculture. The start-ups range from software to technical industry. We help them to get government grants for up to € 150.000 which can fund a start-up up to 100%. It is not easy to get this funding off course, but it is also frustrating that there seems to be no ear for the opinion of the incubator on the feasibility of the project. The committee which is deciding has not much eye for the business side, it is more on science and politics. After a decision is made, it also takes a lot of time to get it processed since all stakeholders have to confirm the decisions made, it can easily take 12 months before anything happens.’

It almost seems impossible to get something of the ground, but this is not the case. Over 30 startups have been successfully created and most of them have scaled up operations on the Technopark or elsewhere. It is after the grant is given that the start-up development can be done fast. The incubator knows his way around, now the right people and institutions and can even help a company accessing foreign markets. It is the drive of the entrepreneurs, the incubator staff and the network that drives this success, and Alexander is confident he can make improvements that will make the incubator better in the near future.

It’s a pity Alexander didn’t have more time, after one hour he has to go, we didn’t have the opportunity to visit an incubatee. Walking back outside I let my thought wonder, comparing images if all the incubators and innovation centres I’ve visited over the years. Then Dimitri askes strait out what my opinion, I glance at Vadim, ‘can I be straightforward’ I ask him, ‘off course says Vadim’. Dimitri smiles, ‘Where is that famous Dutch blundness? Tell me what you think of this incubator’. ‘Ok, honestly I miss the buzz, the entrepreneurial atmosphere. Rationally I must say ‘If it works, it works’ but my gut tells me otherwise. Although Alexander convinced me that he is the right guy, he was also clear about one burden he will not be able to change; bureaucracy’. ‘But you know I’m happy we could visit this place, so we have a ‘taste’ of what is going on so that tomorrow we’ll better understand who we’re exchanging experience with.’ Dimitri agrees with me. He recognised the struggle to get things of the ground in the early years after Estonia’s independency from Russia. ‘You know, in the first stage it was our primary objective to raise awareness for entrepreneurship and create physical space for start-ups. Only after this stage we started looking at start-up quality, efficient processes and so on. In Estonia we just introduced a new stage where we fund results from business incubators’. “If you compare notes with Estonia, that became independent 10 years earlier, you notice they still have a long way to go. But if politics can create a stable and trustworthy environment, Innovation & Incubation will improve along similar lines as we did in Estonia.’

I look at Vadim, he doesn’t seem disturbed, so I ask him how he thinks about the improvements that can be made. He start by saying that you must take into consideration the Moldova is a poor country, and making improvements will take a lot of efforts that will resort in small improvements. But he agrees the things we said, he doesn’t shy away of the truth, that is why they need regular support from European experts. ‘The importance of the seminar tomorrow is that our agency has been asked to draw up a new Innovation Strategy. We’ve asked TAIEX to help us find the experienced people that can give us guidance and ideas to implement in the new policy framework. I hope tomorrow we’ll exchange a lot of experience’. I’m to speak twice tomorrow, on attracting and creating start-ups and on encouraging SME’s to use the R&D base of the country. I’ve seen on the program that also experts from Crete and Brussels are expected, a wide range of people from diverse backgrounds. I’m asked to share my ideas and experience in the field of business incubation and knowledge transfer with people from the government, academia, investors, incubators and business. I hope I can make a small contribution to the development of this small, and largely unknown, European country.